The day before we hiked to Emmaline Lake, I told my mom that "Emmaline" was Emma Schupbach Koenig, the mother of one of Rocky Mountain National Park's three first park rangers, Frank Koenig.  To my surprise, my mom sighed.  "They were always naming places after their mothers and their wives just because they were mothers and wives, not because they DID anything memorable." 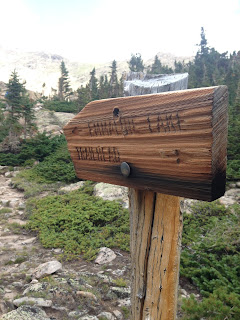 It was true that I couldn't find anything more about Emma.  Her son evidently added the "-line" suffix to her name just as he added it when he named the remote Hazeline Lake in honor of his wife Hazel Ramsey Koenig (note that Frank named Ramsey Peak after his father-in-law, but did not call it Ramsey-line Peak).  I learned Emma was born in Sardis, Ohio, in 1862, to Swiss-German parents; I learned that she married Rudolph Koenig (twenty years her senior), moved to Colorado, and gave birth to eight children (Frank was the second).  I learned that she died in 1960 and is buried in Loveland.  But these Ancestry.com discoveries led me nowhere close to who Emma Koenig was as a person.  What thoughts and dreams did Emma hold dear?  Did she ever think of the alpine lake her son named for her?  Did she ever walk there?  What was significant to her in her 98 years?

Emma Schupbach Koenig happened to be the mother of one park ranger who walked in these woods before trails were built here.  But what else? 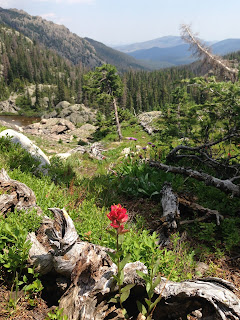 Then, during the thirteen-mile round-trip hike to Emmaline Lake with my mom and my stepdad Gerry, my thoughts shifted away from Emma Koenig to my own mother, whose name is Mary Miller, and for whom I would eagerly name a lake or a peak, if someone offered me that opportunity.  My mother has accomplished quite a bit in her 65 years:  she shone in a long and successful career as an ELCA Lutheran lay minister and a journalist, she raised two daughters on a farm in eastern Iowa, and she has retired to Colorado to live boldly, traveling local hiking trails and across Europe with Gerry.  But I would name a high-altitude lake for my mother not because of her biography, but because she is like the wildflowers that insist on thriving in rock and wind and storm here.  Once, twenty years ago, when all our lives suddenly became very hard, my mother refused to remain defeated.  She bought a little house of her own and she planted morning glories along the backyard fence.  Every morning, she told me and my sister, those purple blooms reminded her to keep persisting, to keep hoping.  The first Christmas in that little house, she held our hands tightly at the table and reminded us that the circle the three of us made was strong enough.  We believed her.

At Emmaline Lake this August, my mom and Gerry and I perched on a flat boulder and ate our sandwiches, which Gerry had slathered with the perfect amount of butter, and I hugged my mom close.  "I think it's enough to name a lake for your mother just because you think she's wonderful," I said.  She grinned at me, holding her sandwich in both hands.  The hike had been more difficult than we had anticipated -- 6.5 miles of several shaky stream crossings on rotten logs, mud, two steep climbs up drainages to ledges -- and my mom was tired, but obviously proud she had reached the lake.

I examined my map.  "It looks like the little lake on the ledge above Emmaline is unnamed.  Should I name it Mary Lake?"

She shook her head.  "Use my whole name.  I want everyone to know which Mary it was."

In 1915, when Frank Koenig, RMNP park ranger, first reached this alpine lake at the base of the imposing wall of Comanche Peak, he named it for his mother, a widow who now lived on the plains in Weld County with Frank's brother Charles.  Maybe Frank lay on the sun-warmed rock awhile and thought with admiration of his mother's survival, from her birth in the midst of the Civil War to her loss of her mother at age 11, from her decision to leave Ohio and strike west with her husband, Adolph Koenig, to her Swiss-German resilience through eight pregnancies in the rough landscape of pioneer Colorado.  Maybe Frank also thought with awe about his new wife Hazel, herself the intrepid daughter of homesteaders in that wilderness.

I like that Frank understood that, of all people, women like his mother and his wife deserved the honor of their names printed on the maps.

After our lunch at Emmaline Lake, we headed down, cognizant of the building gray storm clouds.  We talked about parenting, building relationships, finding ourselves.  The older I get, the more I admire my mother and the more I understand she is human, just like I am.  She nurses worries; she wonders if she is good enough.  Realizing this makes me even more certain that there should be a Lake Mary Miller somewhere on the maps.

When we were still over two miles from our car, our feet aching and our legs tired, a boom of thunder startled us.  Then another.  We stopped to cover our packs and don our rain jackets, though we only expected a brief drizzle of rain.  Instead, the clouds opened:  hail, cold driving rain, wind, more cannon-shots of thunder.  I wanted to run down the trail, and said as much to my mom, who was hiking with her head down.  A muddy brown river roared down the trail beside us, and the heavy rain nearly obscured the sight of Gerry hiking in front of us.

"Go ahead.  I'll be fine," she shouted over the thunder and the rain.

She would have been fine (we were in no real danger from lightning there in the trees), but I slowed my pace.  The point of hiking with her was to be with her.  We trudged through the mud beside each other.

When the sun emerged a half an hour later, the air around us strangely silent, we both breathed again, smiled at each other.  Gerry waited for us on a rock up ahead.  We had weathered storms together before, and the sun did always come out, eventually.

From the shelf just below Cirque Lake, the smaller lake below Emmaline, it is possible to see the entire drainage known as Pinigree Park, where Colorado State University has had a campus since 1910.  In 1972, Hazel Koenig -- Frank's wife and Emma's daughter-in-law -- deeded over most of the remaining Koenig Ranch to the university, and in 2015, the university changed the name of its high-altitude campus from Pinigree Park to Colorado State University Mountain Campus, to distance itself from the logger George Pinigree, who had expressed pride in his role in the Sand Creek Massacre.

How much more honorable to remember people like Emma and Hazel.  How much better for the soul to stand in a meadow of paintbrush, saxifrage, elephant head and bluebells, and to think of women like my mother, who keep sinking roots, searching for strength, even when the world in which they live threatens thunder.


How to hike to Emmaline Lake:
1. Drive toward Pinigree Park on CO Road 63E.  At the Tom Bennett Campground, turn right (toward Sky Ranch Lutheran Camp) on CO Road 145.  Park at the intersection with the Cirque Meadow Trail (a 4WD road that some vehicles could travel for another 1/2 mile).

2.  Hike along the Cirque Meadow Trail west/southwest.  You'll see the CSU Mountain Campus to your left.  Ignore the trails that veer off toward the campus and the ones that veer to the right toward Sky Ranch.  All trails are well-signed.

3. At the intersection with the Mummy Pass Trail, continue on the Cirque Meadow Trail.  Before the last 1,000-foot climb to Emmaline Lake, you'll cross Fall Creek at a gaging station and then climb west to the lake. Again, the trail is well-signed, and rock cairns will increase your confidence.